You are here: Home / Blog / Disabled Parenting / What the ADA Means to Me

So, the Americans with Disabilities Act turns 27 this year. And that’s something worthy of celebrating. Now, before you point out that this might seem to be an odd thing to celebrate, let me quote a scene from the iconic television show Sports Night, where two characters are debating celebrating Bobby Thomson’s “Shot Heard Round the World”

Dan, being the best character on the show, knows that we don’t just celebrate some anniversaries. We can celebrate all of them. Because, the ADA, while being far from a perfect law, has had a major impact on my life. Especially now that I’m a parent. For example: 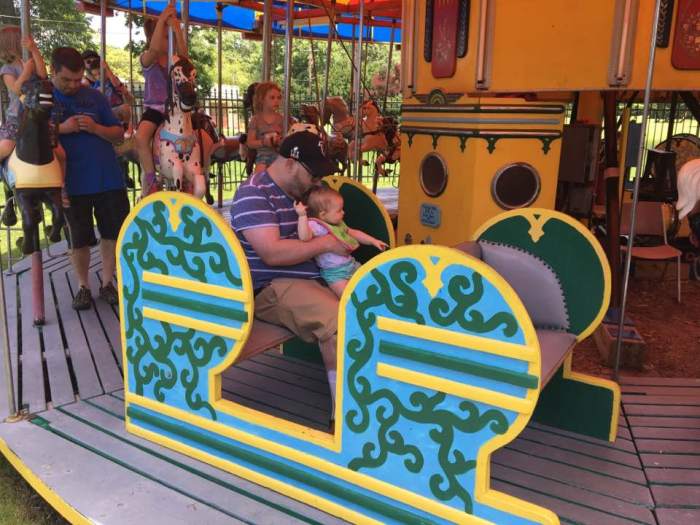 This is me and Cora, riding on a carousel at a local park. Now, you should take a close look at this picture. Because if you do, you might notice that, oh yeah, there’s no ramp or handrails on this thing. The only reason I was able to climb up here with Cora is because I had my beautiful wife Ashley helping me get on while my brother held Cora.

This is the kind of stuff that made me—and still makes me—really nervous about parenting. It’s easy to be a good parent when I have my support system helping set me up for success. But there’s no way I could accomplish something like this if I was spending the day alone with Cora. That’s really sad to think about, actually. One-on-one bonding time is so critical, and the fact of the matter is, our society was not built by people who cared all that much about accessibility. As a result, there are a lot of places I can’t go, and a lot of experiences I can’t partake in, because they’re not accessible. The ADA, for all its flaws, tries to correct that as best it can.

If you’re still reading, a question might have popped into your head by now. You’re probably wondering why I picked something that’s not accessible to highlight the ADA, which is about making things accessible. Here’s the truth: It’s pretty easy for me to come up with examples of things the ADA makes easier for me as a parent. Curb cuts, ramps, elevators, parking spaces, the list goes on.

But I want you to take a look at this photo:

This is a group of people working to build a ramp to that same carousel you see above, thanks to groups like the Friends of Stewart Park and Play by Design. Now, this is not something that’s being done because of the ADA. It’s something that’s being done because a group of people got together, and decided “Hey, this thing that disabled people can’t partake in? They really should be able to do partake in it.”

As I said earlier, the ADA is not a perfect law. There are things about it I find counterproductive. But at its core, to me, the ADA isn’t just a law that says businesses must do X, or that the government will provide Y. It’s an idea. An idea that, just because you’re born disabled, you shouldn’t be unable to do basic things like get into a building, or use a bathroom in a restaurant. The spirit behind that idea is what causes people to decide “Hey, let’s make this thing accessible even though we don’t have to, so someone in a wheelchair can use it.”

That’s what we’re celebrating, and that’s what the ADA means to me (and Cora!)

This blog originally appeared at Parenting on Wheels.

I'm 34 years old and have spastic cerebral palsy. I live in upstate NY with my wife Ashley, 4 1/2 month old daughter Cora, and our dog, Banjo. I work at Ithaca College, and I write the blog "Parenting on Wheels."