You are here: Home / Blog / Disabled Parenting / Reflections From Parenting With a Disability

On a recent visit to the doc’s office that coincided same week my daughter returned to school, I welcomed verbiage bestowed upon me that included the following: “You lost 2 lbs, you have such white teeth, you don’t look old enough to have a child in college.” *Thinks well, it don’t crack* A bit less welcomed however was: “You started young” *almost choked, face cracks*

And though 21 (age when I gave birth to my daughter) was young it was the subtext of that statement that hung in the air a bit like rancid milk. Rewind to the day of of my daughter’s birth almost 22 years ago, I recall a similar exchange with a doctor that included inquiry of my ability to properly care for my baby after the doctor noted I had a disability. At first I thought she was referring to my youthful appearance making a judgement call equating age with inexperience. I soon realized she was wondering if I had the physical capabilities to care for my newborn child.

My labor had been painstakingly long, lasting a torturous 26 hours and the assistance of forceps to bring forth this new life may have prompted the query since it was particularly difficult with weakened abdominal muscles due to having a form of Muscular Dystrophy. The birthing process for many women is often exhausting and labor intensive; disability adds another dimension as it does to any setting and one’s ability is always in question. This is due in part to limited narratives in media that focus on comprehensive angles of what it means to live with a disability including adaptations and support networks. More often than not the lens of limitation is invoked and the scope is narrowly defined with depictions swinging from objects of pity to inspiration-porn.

This is of particular concern because these stereotypical concepts can form the basis of negative attitudes that create access barriers like treatment disparities and policy measures that are harmful to people with disabilities. And in this particular case, parents with disabilities abilities are often side-eyed, triple analyzed, and even have parental rights reduced or revoked more often than non-disabled parents in custody cases as evidenced in the groundbreaking report, “Rocking the Cradle: Ensuring the Rights of Parents with Disabilities and Their Children”.

And sometimes those negative concepts get internalized. When the question was posed regarding my ability, I answered in the affirmative but when I returned home was enveloped in fear like most new parents—but was a bit more preoccupied with safety and worried that I wouldn’t be a good enough parent who might be unable to meet my child’s needs. I saw myself in such a limited capacity and since disability permeates every aspect of your experience it impacted my parenting. I felt incomplete knowing I had a harder time with the more physical aspects of parenting i.e. picking up, running after, getting on floor, etc some of which I could only do in an adapted fashion, with assistance, or not at all.

It wasn’t until some years later that my evolution and self-awareness slowly began to expand. This turning point occurred actually when my disability progressed and forced a lifestyle change that included working much less. Gripped with panic, I was forced to figure out my new normal and re-evaluate what living with a disability meant. Giving consideration to the trajectory of my life, I pondered the legacy I would leave for my daughter and focused my energy on bridging the gaps in self-worth and building a bond that would foster confidence instead of fear. Since a lot of what was being modeled were choices made from a fear-based mindset, I wondered how it might be absorbed by impressionable lil eyes and mind. It was also around the time I found my new passion of disability advocacy and got in group with like-minded folks with cross disabilities. So many examples of living with disabilities working in collaborative effort toward beneficial change was an eye-opener and spirit-boost!

Looking back, I had a great support system composed of family and friends who supplemented care when necessary especially when juggling books and bottles. What that support system lacked however were other mothers with disabilities with whom I might’ve found commonality and comfort in knowing there was relatability. It would’ve also been great to swap tips, resources, best practices, and frustrations.

Fast forward past the toddler, tween, teen years and we have a self-assured young adult in her senior year of college. And a mother with increased self-esteem, advocacy skills, and deep appreciation for life experience that lead to such insight. Maybe, just maybe I did something right.

* This blog post originally appeared on Slow Walker’s See More. It is being reproduced with permission. 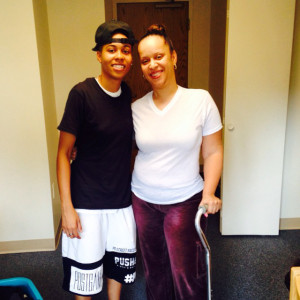 Daughter, me with cane, both smiling, standing together in dorm room

Heather Watkins is a Disability Advocate, author, blogger, mother, graduate of Emerson College with a B.S. in Mass Communications. Born with Muscular Dystrophy, Heather is a cane-user, loves reading, daydreaming, chocolate, and serves on a handful of disability-related boards. Her blog Slow Walkers See More includes reflections and insight from her life with disability.