Even though I am 52 years old, I do not think I have ever spent so much time pondering disability issues as I have since Emily, my daughter, started this blog. The conversations we have had before, during, and after she writes her posts have been illuminating and have further reinforced how her experiences growing up with a visible physical disability have been very different from my own.

A little family history might be useful now. My parents are unaffected by Larsen syndrome (LS); same for my older brother. But I have a younger brother who like me has LS. It was his birth that led the doctors to suspect a genetic disorder. However, once our anomalies were diagnosed as LS, our family was assured it was a recessive disorder. This means that both parents must have the defective gene for the condition to be passed on to a child. Now flash forward to when I became engaged to my wonderful husband Marc: we once again consulted with the same genetic specialists who told us that the gene for LS is so rare that we would not have an affected child. But at my twenty-week sonogram with then fetal Emily, the telltale signs of LS were detected and we knew that our future as a family would again be forever affected. Only then did the doctors realize that the LS affecting my family was really a dominant genetic disorder. 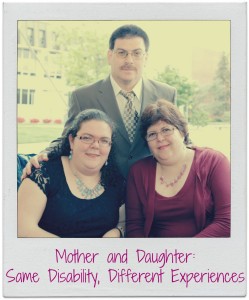 I am not going to lie – I was emotionally devastated when I knew Emily would face the same physical and emotional challenges that my brother and I did as children. And truth be told, Emily has had to face even more hurdles and challenging surgeries such as cervical spine fusion when she was 17; she spent much of her senior year in high school in a halo used to stabilize her head and neck while it healed from the extremely risky operation. But incredibly she has matured into a much more positive, confident, and outgoing person than I am. While it would be wonderful to think her Dad and I can take all the credit for her successes, I think we truly owe a debt of gratitude to all the disability advocates who are responsible for the ADA and all the other programs and services for individuals with disabilities that resulted from passage of this landmark legislation. Because of things like curb cuts, accessible bathrooms in public places, and accessible public transportation, people with all kinds of disabilities are much more visible in all our daily lives. When I was growing up, other than my brother, we only regularly saw one other boy with a visible physical disability.

In addition to the benefits of the ADA, the development of the Internet has had a profound effect on how people with all types of disabilities can communicate today. When we were kids, we only knew of one other person with our orthopedic condition and this happened by a stroke of good fortune: I was perusing the TV Guide one day and saw an ad for the TV show ZOOM which was featuring a girl with LS. We had to write to the TV station that produced Zoom to ask that they contact the girl and her family to see if they would be interested in contacting us. They were, and a flurry of letters soon went back and forth. Today, I am friends with this woman on Facebook, as well as being connected with many other people who either have LS or are the parents of an affected child. The ease in which people with all types of conditions can exchange essential information and provide support via Facebook, Skype, etc. makes having a disabling condition so much less isolating.

While there is certainly still much work to be done, as Emily shares in many of her blog posts, having a disability no longer precludes participation in the usual childhood recreations or adult occupations. For example, new playgrounds are being designed to include wheelchair access so all children can interact just as all new public construction projects (and many private ones as well) follow the principles of universal design to maximize the population of people who can enter and conduct the business of daily living. And with the continued efforts of advocates such as my wonderful daughter, the sky is the limit as to what can still be accomplished!

This blog post was originally published on Words I Wheel By.