You are here: Home / Blog / Disabled Parenting / Happy 27th Birthday to the ADA from a Disabled Mom! 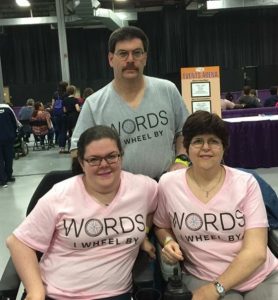 When I was a child, I only knew two other people with disabilities.  One happens to be my younger brother (who also shares my orthopedic disability), and the other was a boy in his grade who was born with spina bifida.  We rode to school on the “cripple bus,” as it was routinely pointed out to me.  My daughter, who attended a mainstream school, was also transported to school in a smaller bus with a wheelchair lift, but she was never teased because of this.

When I was a child I wore leg braces but did not use any assistive device such as a walker or wheelchair.  In hindsight, I wish I did.  I would have had a lot more energy and would have been better able to keep up with kids on the playground during school recess.  Instead, I chose to isolate myself by working in the main office doing clerical chores. During gym class, I was either on the sidelines as a scorekeeper or, in later years, was allowed to have a study hall period.

My daughter, on the other hand, was given every opportunity to participate in recess and gym.  Starting in middle school, an adaptive physical education class was created for her.  But instead of it being isolated just to her, she was welcome to invite her friends to join in.

Summer camp was another place I dreaded as a child.  My dad was an educator so he worked at camps to provide additional income for the family and to give me and my brothers something to do.  While I could participate in crafts and use the pool, other outdoor activities such as running games or volleyball were not possible.  So I just baked in the heat on the sidelines.

My daughter also attended summer camp, and she also baked a lot in the heat.  However, her camp was geared to kids with all types of disabilities so inclusion in activities was never an issue.  Turns out that her camps would have been available to me and my brother but my parents never knew about them.  The ADA, in addition to enacting laws, has served as the impetus to educate families more about services available to their disabled family member(s).

Another childhood issue I faced was exclusion (mostly self-imposed I realize now) from social events such as parties, sleepovers, and school dances.  My fear of exclusion actually created more exclusion.  Despite the ADA, my daughter has had to accept some exclusion from social events.  When she was younger she could be carried into friends’ houses with steps but this became increasingly difficult as she got older – especially once she started to use a power wheelchair. But on the whole, the ADA has still enabled my daughter to attend events, go to lots of different places, and lead a rich social life.

Missing a sleepover party may seem like a small issue in the scheme of things.  But any time a child with a disability is excluded it is hurtful.  While the reason for exclusion is often environmental (i.e., steps), quite frequently it is attitudinal.  A child with any type of disability must not only be able to get on the playground, but also should feel they belong there equally with their peers.  I like to think of this as “emotional inclusion.” I believe that since the passage of the ADA, society has continued to work toward this goal.

As a parent who raised a child of the ADA generation (she was born one year after its passage), I am grateful for all the benefits it has afforded her in her life. Her experience growing up was vastly different than mine even though she actually has more physical limitations from our disability than I do. She is more confident than I will ever be and proudly identifies herself as a disabled woman. And she is using her confidence to work on behalf of her generation and generations to come, not only to protect the legacy of the ADA but also to advocate for solutions to problems not yet solved.  And as a Mom, I could not be any prouder!